Meet the Expert: Arms and Armour

The European Armouries at the Wallace Collection reveal that we can and should look at armour as expressive art, as well as functional equipment for fighting. Above everything else we might see in these fascinating objects, it was the artistic merit and sheer visual impact of armour that enraptured Sir Richard Wallace, inspiring him to create one of the finest collections in the world. Once that aspect is revealed, many new paths open up to us, in our exploration of a great Renaissance art-form.

In the art of armour, form and function go hand in hand. The steel plates must be closely fitted to the body so that in action, they create a human exoskeleton. This technical demand immediately moves armour into the realm of sculpture, as it takes on the elegant and graceful silhouette of its owner.

The relationship between maker and user, between artist and patron, is the heart of this art-form. This armour, with its exquisite profusion of raised vertical ridges or flutes, is the best of a number of examples of the ‘Maximilian’ style in the Wallace Collection. This heavily fluted style was developed by south German armourers in the time of the Emperor Maximilian I (1459-1519), the greatest patron of the German Renaissance. 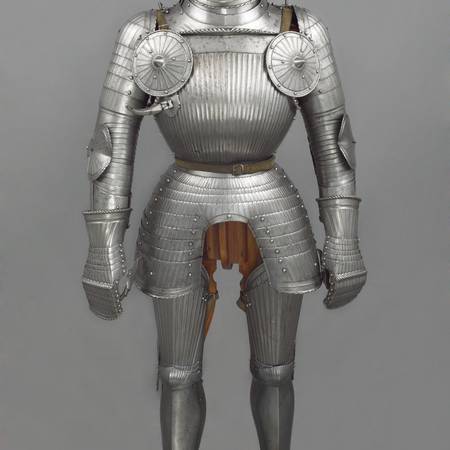 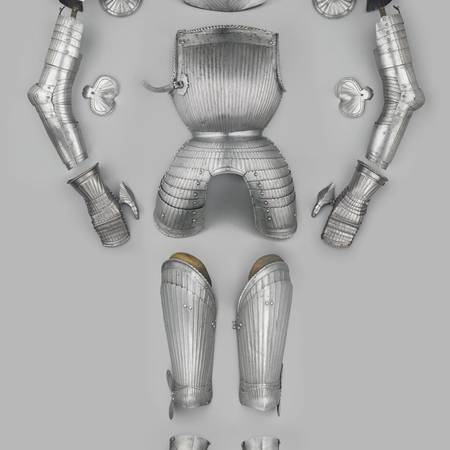 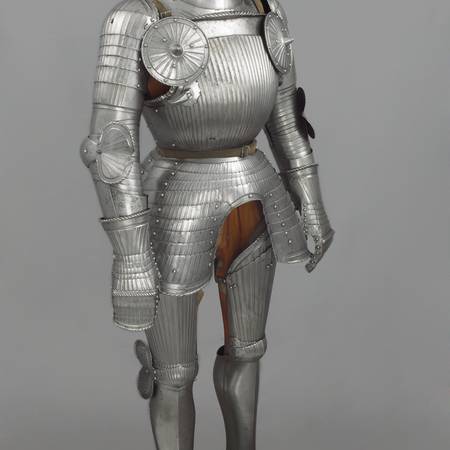 Any garment or object worn on the body with intention and purpose naturally takes on expressive power. Art is about messages – there is something the artist wants to convey or, in the case of ‘body art’ such as clothing, tattoos, jewellery, hats, shoes and armour, it is the wearer who is trying to communicate with you.

This magnificent armour is designed to simulate and thus invoke the flamboyant clothing of the German Landsknechte – fierce mercenaries who dominated the battlefields of the Renaissance. They were famous for wearing clothing in the ‘puffed and slashed’ style, a stylised elaboration of the cuts and tears suffered in combat.

Even with its complex and elaborate decoration, created by combining embossing, chasing, etching and fire-gilding, this remains a practical war armour, probably made for a nobleman in command of squadrons of professional Landsknecht infantry. 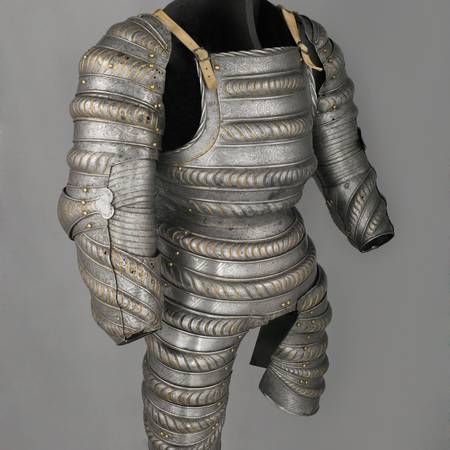 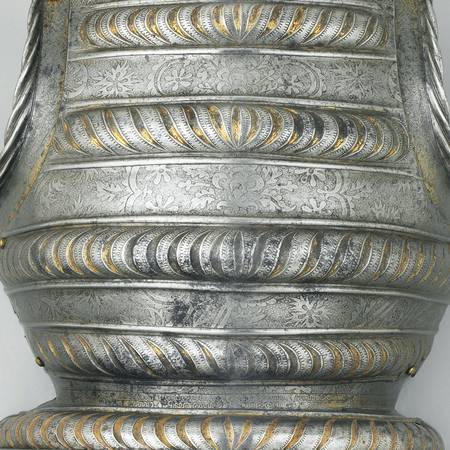 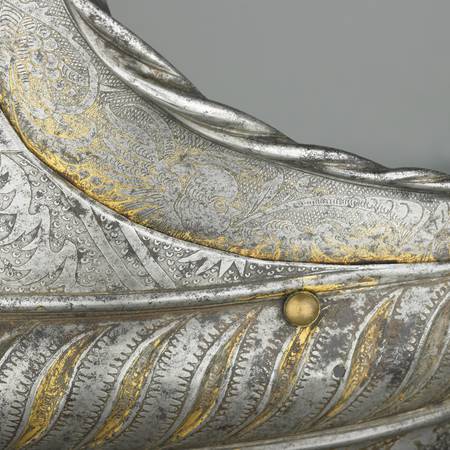 The greatest works of Renaissance armour-art embody a perfect harmony between two fundamental qualities – the essential sculptural forms and elaborate decoration. Of course, well-made armour can be powerful and expressive without any ornamentation at all - beauty can arise solely out of pure form. However, the great masterpieces go further, with complex decoration involving diverse themes, subjects and symbols.

When used well, decoration can complement and enhance the shapes, changing the impact of the physical presence of the wearer, from pleasing, to impressive, to shocking and awe-inspiring.

Kolman Helmschmid was one of the greatest master armourers of all time. For generations the Helmschmids were court armourers to the Habsburg emperors, the most powerful aristocratic dynasty in European history. Their work is defined by its harmony - technical perfection united with etched and gilt decoration of the finest quality. 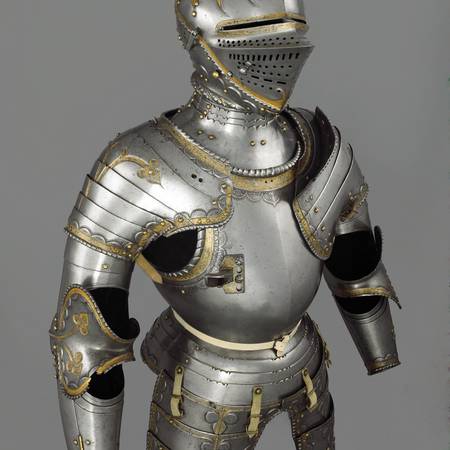 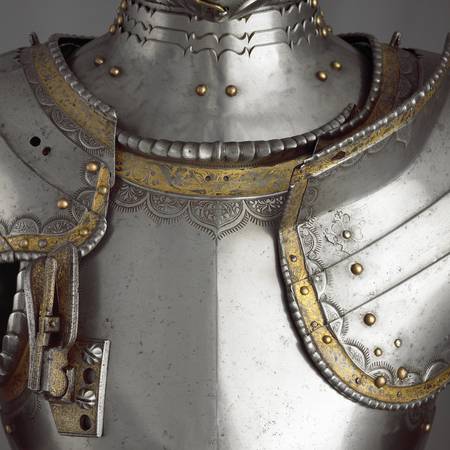 Perhaps the loudest, most constant message encoded in Renaissance armours is power. The polished surfaces reflect the sun’s light, and thus the armour radiates with divine power – bestowed by God on the warrior class.

The quite literal superhuman attributes of the knight -his prowess, invulnerability, and god-like speed and strength (contributed by his horse)- proved that aristocratic claims of heaven-sent supremacy were actually true. Therefore, those powers had to be demonstrated, on the battlefield but also in courtly combats like the joust. An armour was an expressive work of art, and thus its active use was an elaborate form of performance art.

These rich pieces show how the paraphernalia of chivalry allowed the Renaissance knight to perform apparently super-heroic feats in combat while maintaining comparative safety. The breastplate is fitted with two layer of reinforcement; it can be struck directly at the gallop with long, heavy lances without the wearer being injured.

The breastplate is signed POMPEO by its maker, a rare instance of an armourer’s signature. 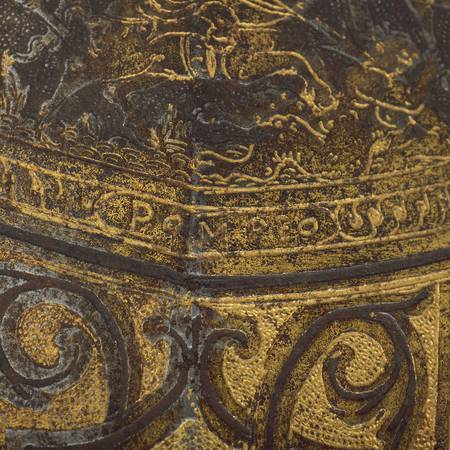 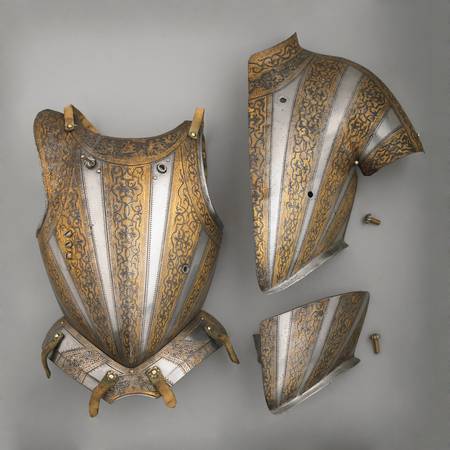 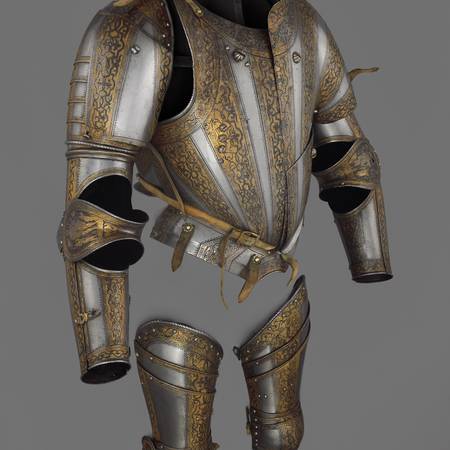 Another way that the European aristocracy reinforced the message of supremacy was by drawing connections between itself and the heroes of ancient mythology and pseudo-history. Many Italian Renaissance families, for example, claimed descent from Classical figures such as Hector, Achilles and Hercules. Elsewhere in Europe, spurious familial lines were invented, extending back even to characters from the Old Testament.

As the Renaissance fascination with everything to do with the Ancient World proliferated across Europe, artists rapidly developed a complex language of associated iconography and design, in order to visualise this very contemporary communion with the distant past. For their part, armourers developed the all ‘antica or heroic style, comprised of close study of real Ancient Greek and Roman design amplified with injections of pure, wild fantasy.

Renaissance rulers resurrected the Roman tradition of the triumphal entry, the ostentatious parade of a victorious army. Fantastically ornate armour was created for such events, like this helmet, embossed, chased and gilt with foliage and the grinning face of a forest spirit or grotesque. 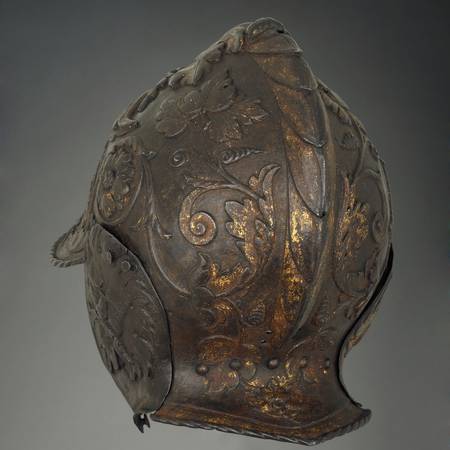 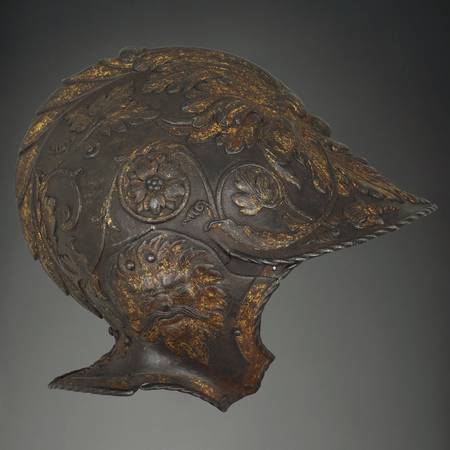 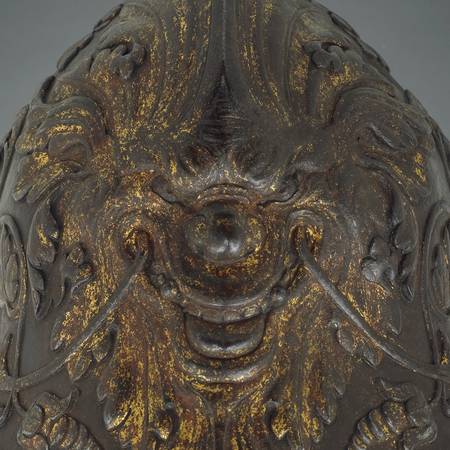 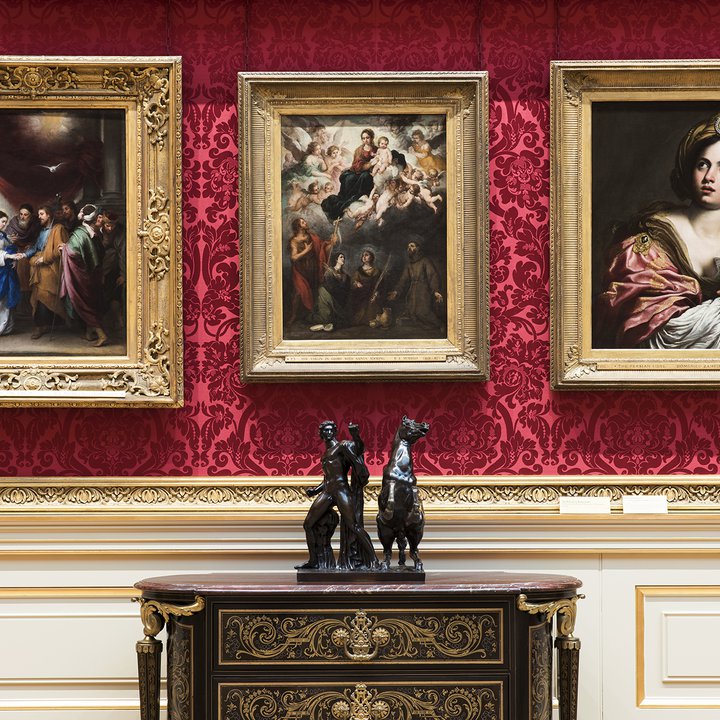 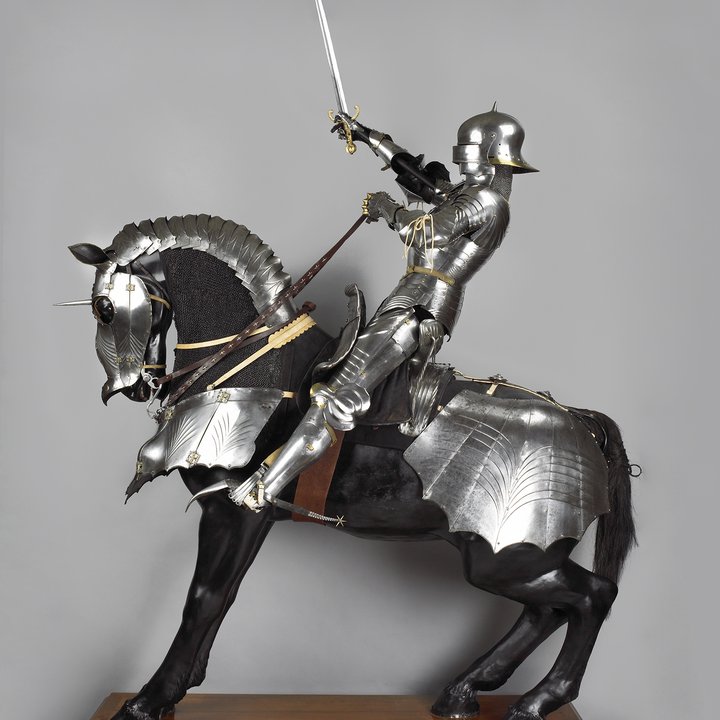 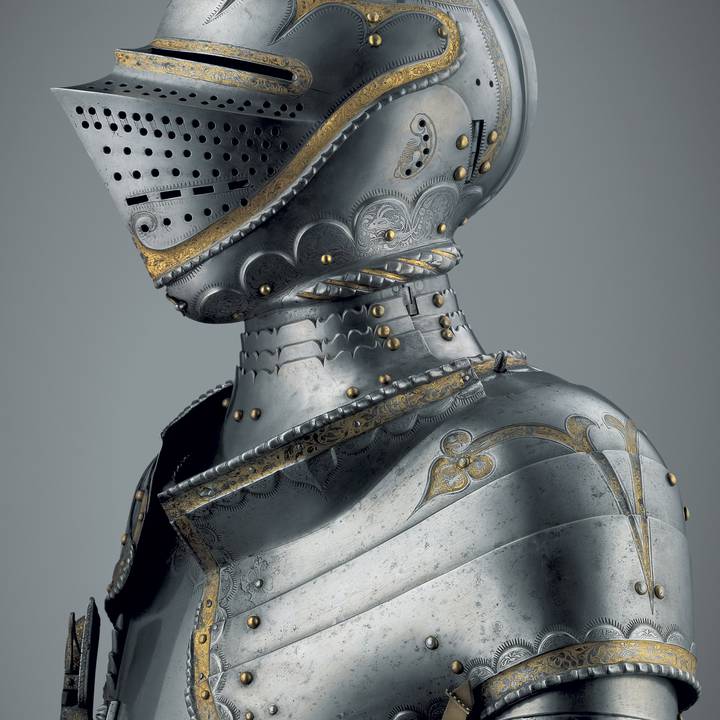 The Wallace Collection is famous all over the world for its breath-taking European Armouries, discover them in this story. 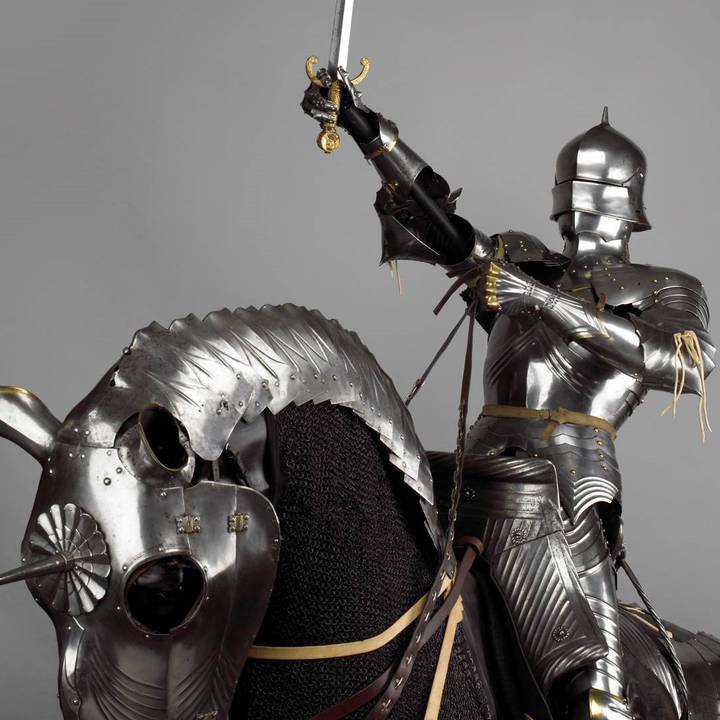